WooHoo!!! Messy Boy Party is all about the games!!!

My previous post was about my son's 4th birthday party, a Messy Boy Party to be exact. This post is all the fun messy games!

We started out loooooow on the messiness scale. None of the boys are super messies, so we didn't get too far to the top of the scale either. Here's our first game - The Jello Toss: 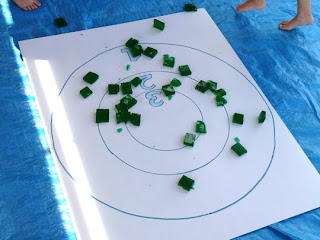 We had an odd number of guests, so instead of tossing to each other, we used a traditional bull's eye target on the ground ... which was covered with heavy duty tarp to contain the spillage. They took turn throwing jello jiggler squares at the target, trying for the most points total.

Note: none of our games had "winners." The boys were going for total points in order to win - as a group - the chance to uncover the secret prizes. More on that later. I had my hubby man the chalkboard scoreboard and "tally" up at the end of each game. Remember, these are (mostly) 4 year olds, so he was free to score at whim as they eagerly awaited the results after each game! Adorable.

Next up was the Spaghetti Bowl Relay: 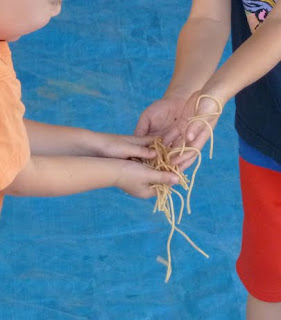 The kiddos lined up across the tarp. One full bowl of noodles (cooked and drizzled with olive oil) at one end, and an empty bowl at the other. They had to pass the spaghetti hands to hands down the line to fill the empty bowl. We had a (pretend) timer and cheered them on to work speedily. Score another hundred points for making it in just under the buzzer!  :-)

OK, no. There was no shaving cream fight. These little guys were way too nice for that! 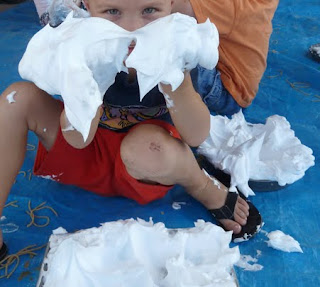 We simply filled pie tins with the shaving cream and sat them each down to play as they so choose. Now, the funny part was, the boys really didn't get too messy with it!! BUT, birthday boy's sister and one of the guest's sister who joined in went HOG WILD!! Is this a girl thing? The boys covered some arms, legs, hair, but not a spec of clothing, while the girls covered EVERYTHING!! 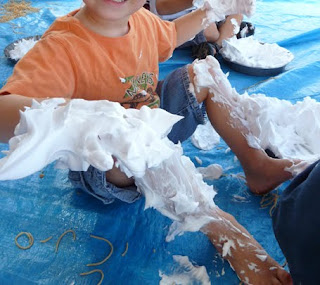 The shaving cream play time scored well, but not quite enough for the big prize. So we needed another game to earn points. Since they were asking to get cleaned up, I had the perfect solution – WATER BALLOONS!: 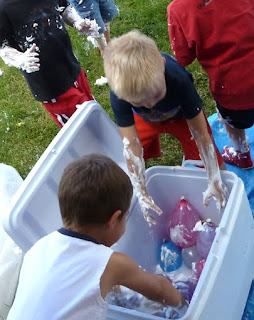 Once again, these sweet boys were too sweet!! They loved throwing them, but mostly just at the grass or rocks!  :-) 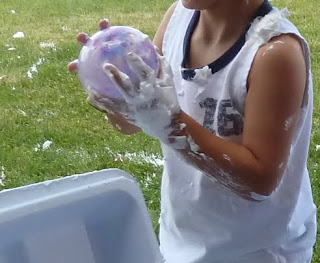 Finally, the party boys had scored enough points for the BIG PRIZE!  They went over to the giant bucket and remove the covering sheet ... where they found one giant squirt gun/water blaster for each = WATER FIGHT!!: 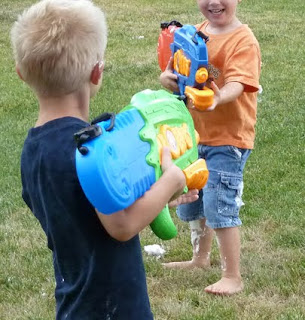 NOW they were ready for some serious action! They could clean the remaining shaving cream off each other all they wanted! 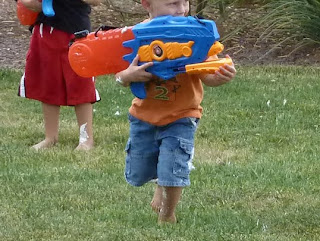 After that they were ready for cake! I had made an ice cream cake and the boys were to finish decorating it for me! That'll be in my next post! Then off to the trampoline, then gifts, then a couple more games. Like the Cheerios Face Off: 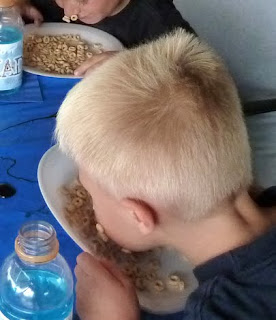 We buttered their faces, then filled a paper plate with Cheerios. Let them see who could get the most to stick on! Next - TARGET PRACTICE: 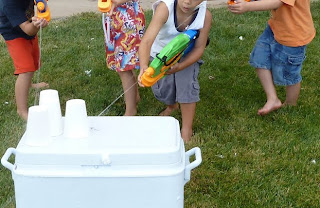 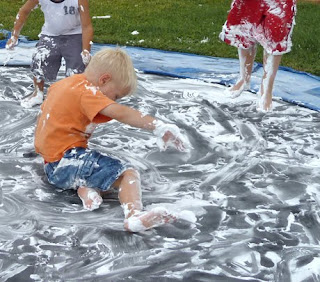 Pretty soon everyone was back on the tramp, slipping, sliding, spraying, running and jumping! 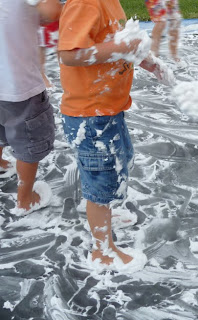 After most of the messy shaving cream had evaporated or been wiped off, they jumped in the pool!

Please, share your fun game ideas in the comments so this post will be a good resource for others wanting to do a "Messy Party" theme for their event!
Next time: the ICE CREAM BIRTHDAY CAKE and the recipe so you can make one, too!

Looks like a blast. and it must be a girl thing cause I do believe that I would have totally covered myself and others in shaving cream :) haha!

~Emily N. from " too Blessed to Stress"

Wow! How fun and creative!!

Sounds like fuN! I will definitely be refering back to this when my son gets older!
love~

Stumbled upon your AWESOME party idea while checking out your site on your SITS day. BRILLIANT! We have four boys and I wish I had thought of this theme years ago. Hope you had a great SITS day. I'll definitely bookmark your site for future reference. :)

What a great idea! I'm thinking I might use some of these ideas for my son's 4th birthday, he loves to get messy!

Great party ideals. Not just for boys .I will be having a cook out n lots of fun thanks

Great party ideals .not just for boys .I'll be having a cook out n lots of fun thanks

I can't wait to try this with my grandkids! Thanks for posting!

It's funny you mentioned the girls were more into the shaving cream than the boys. I work with teens and girls are ALWAYS more willing to get messy than the boys. We always get a ton of girls who volunteer to do our mud activities, or whipped cream games, messy olympics whatnot... and usually only a handful of guys will step up to the plate. I'm not sure where the stereotype that boys are messier than girls comes from, my brothers and my boyfriend hate being messy or dirty - and I love it!